In April 2021 the Company commenced a scoping study on the SBNP (“Study”) to determine the economics of the Project at current and projected nickel, copper and cobalt prices. Global nickel consumption is forecast to more than double by 2040 and the proportion used in battery precursors for electric vehicles (EVs) is projected to increase from 7% to over 30% of demand with almost exponential demand growth by 2030 (Wood-McKenzie, Paydirt Nickel Conference, Oct. 21). Nickel sulphide projects are favoured due to the high payability (>90%) of the nickel intermediates produced, that are suitable for EV battery production.

The current Study is based on previous work conducted from 2004 to 2007 by Sherlock Bay Nickel Corporation, that included heap-leach processing, and mining study reports completed by AMC consultants Pty Ltd (AMC), initially in 2005 and updated for the Company in August 2018.

The SBNP includes two nickel sulphide deposits, Symonds and Discovery, both of which are tabular and trend northeast-southwest over an approximately 1.5km strike corridor (see mineralisation envelopes, Figure 2), within the regional scale Scholl Shear Zone (Figure 1). The deposits are each approximately 15m to 20m wide (Figure 2) and dip and plunge almost vertically (Figure 3). 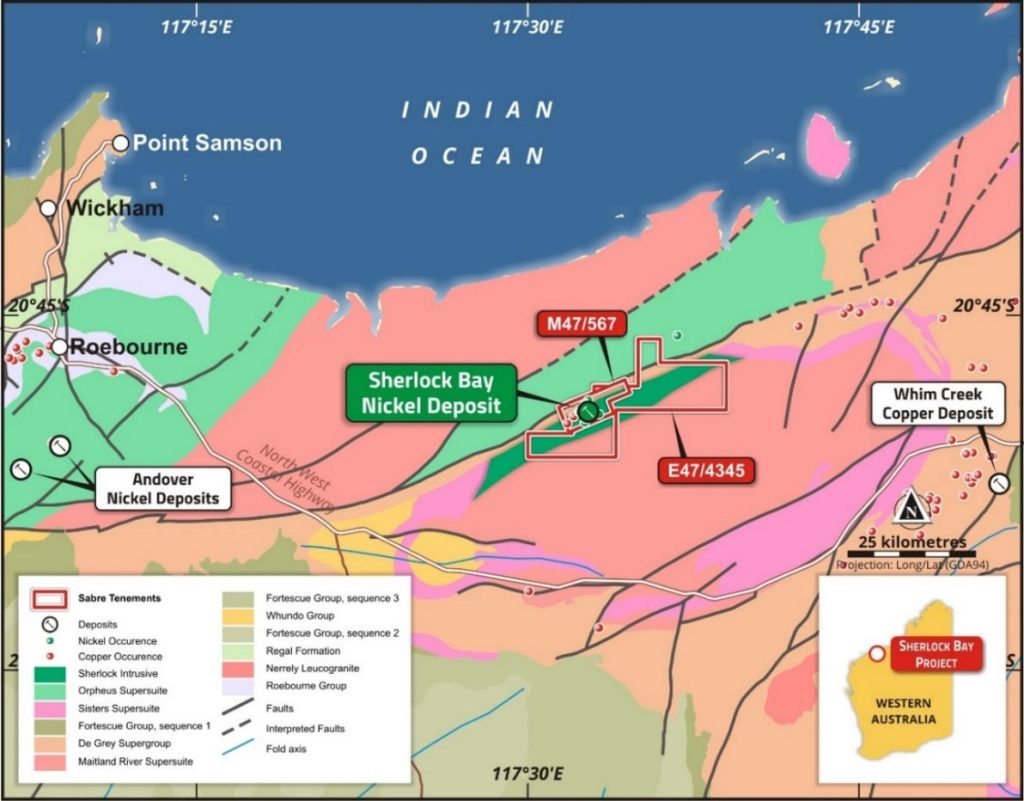 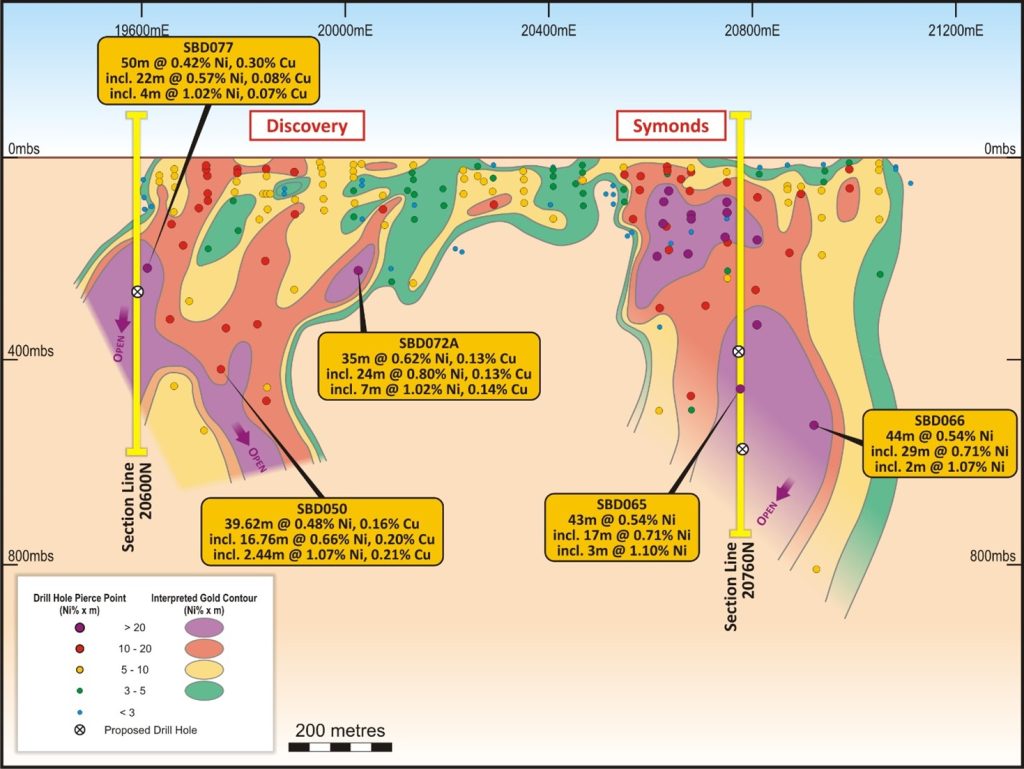 The updated AMC mining report (2018)2 includes two, optimised, open-pits that would operate for up to 5 years and overlap with underground development and establishment of sub-level cave operations, via separate declines (see longitudinal section, Figure 4). The underground mines continue for the remaining 8 years of a 10 to 12-year operation, producing 2.0 million tonnes of “ore” per annum (Mtpa) once full production levels are reached.

The AMC mining report2 demonstrated that, at the applied nickel price of USD15,000/t (now >USD20,000/t), significant operating cash-flows could be generated from both the open-pit and underground operations and, subject to additional studies required to determine updated processing capital and operating costs, there is potential for an economic mining project to be established at SBNP.

The new work is based on inputs generated by Strategic Metallurgy Pty Ltd of Perth, who have completed the processing flow-sheet design, and Lycopodium, who are finalising their report on updated processing and surface infrastructure capital costs and processing operating costs.

The final stage of the Study included the updated processing capital costs and operating costs with updated mining schedules to produce a new SBNP cashflow model at current nickel, copper and cobalt prices, that maximises cash-flow from the current resources. This is an iterative process, with potential changes to mining schedules required to optimise cash flow in the early stages of the operation.

It is clear from the early evaluation of the Study inputs that cashflow is sensitive to mined grade. The average grade of the SBNP resource is 0.4% nickel with copper and cobalt credits. However, there is evidence that the two deposits increase in nickel sulphide grade at depth, as shown in a cross section through Symonds deposit, Figure 5. The nickel sulphide deposits occur in the footwall felsic volcanics but converge with the Sherlock intrusive (ultramafic/gabbro) contact at depth. Previous work has indicated that the nickel-copper-cobalt mineralisation is associated with the Sherlock mafic-ultramafic Intrusion, that has been demonstrated to be sulphur saturated. Anomalous base metal and PGE values with associated sulphides were reported by Outokumpu based on 1990s drilling and previous EM anomalies along strike of the Sherlock Bay deposit have only receiving limited testing.

The likely presence of higher-grade disseminated to massive sulphides at Sherlock Bay is also supported by the Andover discovery by Azure Minerals Ltd (ASX:AZR), located 40km to the west of Sherlock Bay (Figure 1). Andover has produced nickel intersections, with massive sulphide mineralisation, including 4.5m @ 3.95% Ni, 0.8% Cu, 0.16% Co from 486.6m in ANDD0045, and 16.8m @ 1.04% Ni, 0.46% Cu, 0.05% Co from 460m in ANDD00432. The mineralogy of these intersections and association with gabbro intrusions is similar to the Sherlock Bay nickel deposit associated with the Sherlock Intrusive (Figure 1). 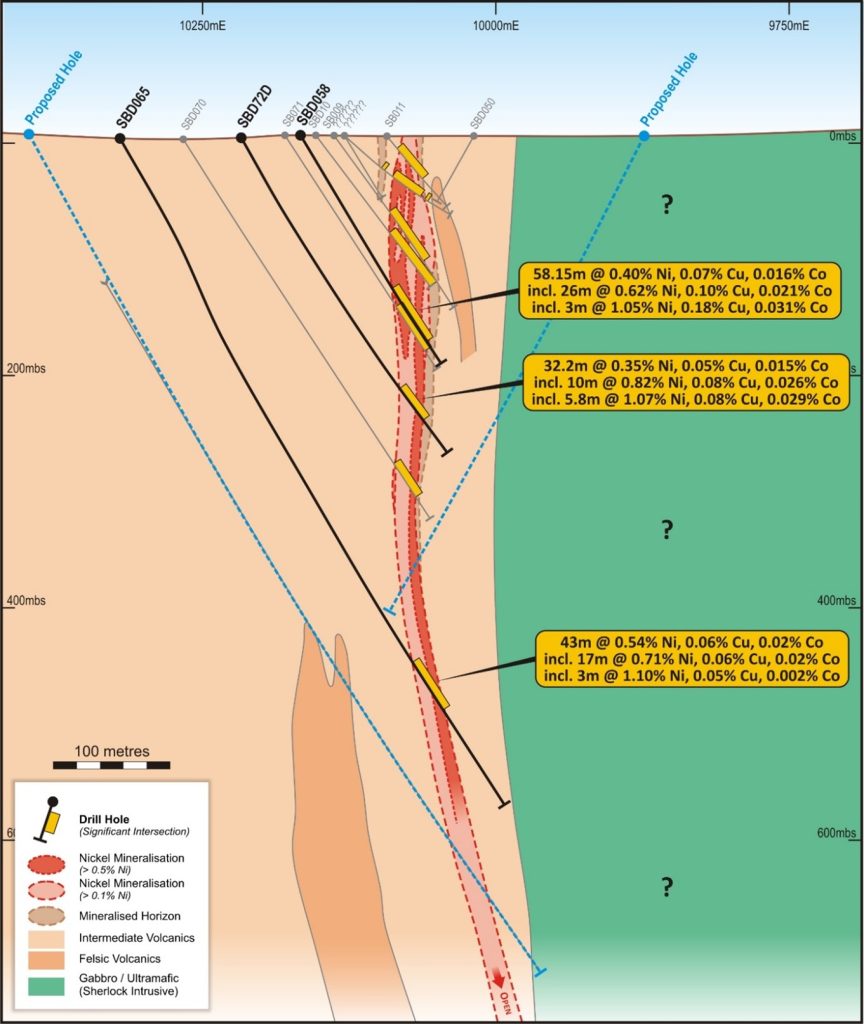 The outcomes of the Sherlock Bay Nickel Project Scoping Study (released 27th January 2022), indicate that, based on a combined two open pit and two underground mines development strategy and a production rate of 2Mtpa following initial ramp-up over 10 years of mining with a 2 to 3 year processing tail, the Project produces strong operating cash-flows and a positive cash-flow after return of capital at current Ni (and Co, Cu) pricing (LME Ni price: US$10/lb / US$22,040/t – based on a 10 day average spot Ni price for period ending 21/1/22).

These financial outcomes provide the Company with a strongly cash-flow generating Base Case that is highly sensitive to increased Ni price and Ni production grade, with upside potential to grow the high-grade component of the nickel resource through drilling of extensions to both the Discovery and Symonds deposits at depth. 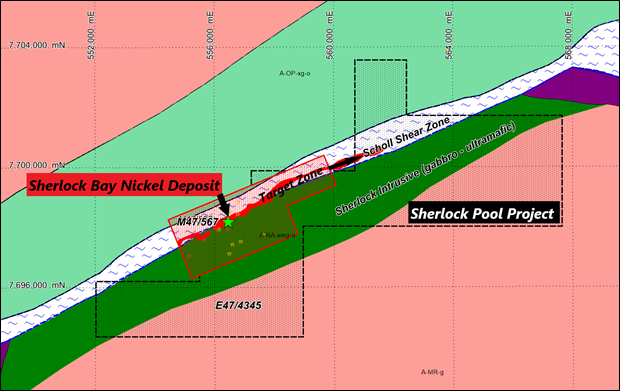 Very little of the previous exploration in the Sherlock Bay area has focussed on locating massive nickel sulphides that would be expected to occur in structural embayments and/or the “neck” or “feeder” of the Sherlock intrusive, in the footwall of the main intrusive body (potentially remobilised in the Scholl Shear).

The Company plans to rapidly advance exploration of the Sherlock Pool tenement, including detailed electromagnetic (EM) surveys to locate potential massive nickel sulphide deposits, to be followed by aircore then deeper RC and/or diamond drilling to test key targets (Figure 6). The discovery of massive nickel (+/- copper and cobalt) sulphides at Sherlock Pool would potentially enhance the economics of the Sherlock Bay Nickel Project, which is the subject of a Scoping Study, nearing completion.