The Nepean South Project is located directly south and along strike from the historical Nepean Nickel Mine (see Figure 1 below), owned by Auroch Minerals Limited (ASX: AOU). Nepean was the second producing nickel mine in Australia, producing 1,108,457t of ore between 1970 and 1987 for 32,202t of nickel metal at an average recovered grade of 3.0% Ni1. 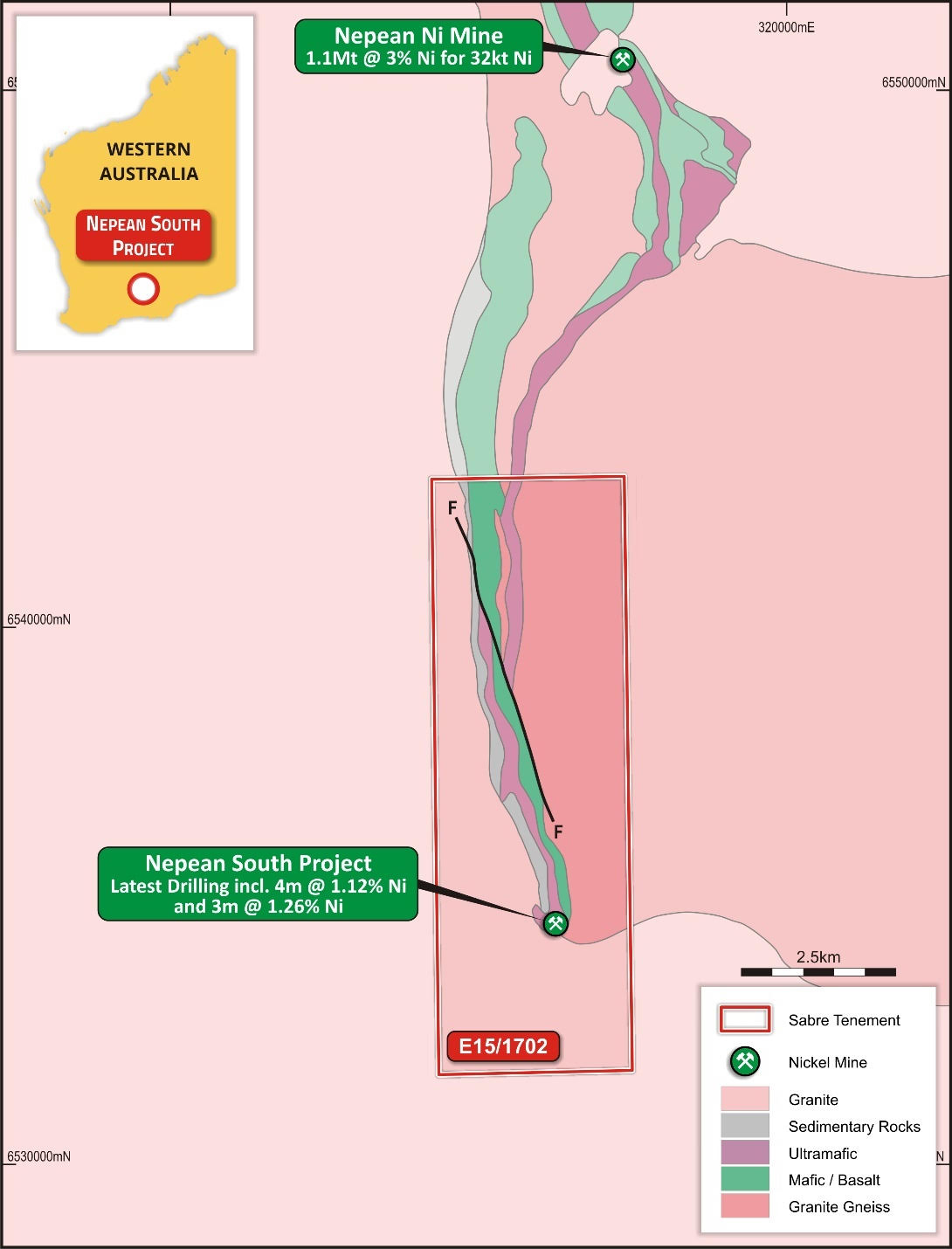 The association of high nickel values with elevated copper, particularly in NRB048 (6m @ 1.84% Ni and 0.02% Cu), indicates that the Nepean South Project is highly prospective for the discovery of massive nickel sulphides in primary lithologies.

RAB drilling was completed to only very shallow depths, on average only 42m from surface, with many holes drilled to even shallower depths. Deeper potential in the vicinity of the shallow RAB intersections will be targeted for the discovery of massive nickel sulphides.

To assist drill-targeting, an initial exploration program is planned at the Nepean South project comprising an EM and magnetics survey (airborne or ground-based) across the entire strike length of the prospective ultramafic sequence. Drilling will then follow, to test primary footwall embayments in the vicinity of identified komatiites, associated with elevated RAB geochemistry and/or EM anomalies to target nickel sulphides at depth.

Application E15/1845 is located southwest and on the western side of a regional dome from the Queen Victoria Rocks nickel sulphide occurrence (Figure 2). A strong northwest trending magnetic feature is the primary target for investigation for remnant greenstone/ultramafic and/or magnetic BIF horizons.

The exploration program on these tenements will include detailed airborne and/or ground magnetics and gravity surveys to detail the anomalies and define targets for channelised, nickel-sulphide bearing ultramafics. This would be followed by soil /auger geochemical sampling and targeted aircore drilling of coincident magnetic/gravity features and anomalies. RC drilling to follow based on lithologies intersected and anomalous nickel +/- copper anomalism.

Under the Acquisition of Chalco the Company holds an 80% interest in the Ngalia Uranium Project which comprises two exploration licence applications (EL32829 and EL32864) located within the highly prospective Ngalia Basin in the southwestern Northern Territory (NT) (see Figure 3 below). The Ngalia Basin has been extensively explored for uranium mineralisation in the 1970s and 1980s with several significant uranium resource projects identified along the northern extent of the basin.

The Ngalia ‘Dingo’ tenement EL32829 is highly prospective for tabular, sandstone – hosted, uranium–vanadium (U-V) deposits of Carboniferous age. The targeted deposits are fluvial, sandstone-hosted U-V deposits which are analogous to the nearby Bigrlyi U-V deposit (Figure 3).

The exploration program on these tenements will include detailed airborne and/or ground magnetics and gravity surveys to detail the anomalies and define targets for channelised, nickel-sulphide bearing ultramafics. This would be followed by soil /auger geochemical sampling and targeted aircore drilling of coincident magnetic/gravity features and anomalies. RC drilling to follow based on lithologies intersected and anomalous nickel +/- copper anomalism.

The Dingo tenement EL32829 is predominantly outcropping Ngalia Basin units, including the highly prospective Mount Eclipse Sandstone, which is folded in the Patmungala Syncline. In the southern part of the tenement the Mt Eclipse Sandstone horizon is covered by flat lying Palaeozoic sediments, however drainage anomalies with elevated uranium highlight the prospectivity of the underlying units.

Initial exploration for sandstone-hosted, uranium–vanadium deposits in the Dingo project would focus on potential extensions of identified prospects and will include detailed magnetics to trace west-north-west trending structures, and further, detailed, geochemistry to better define and extend historical geochemical anomalies (U-V and Cu-Au) in the NE corner of the tenement, in an area of structural complexity. Drilling targets will be initially followed up with grid-based aircore drilling prior to deeper RC drilling to test anomalies and key contacts.

The Napperby deposit is hosted by palaeo-drainages incised into the Palaeo-Proterozoic to Meso-Proterozoic basement and filled with 10m to 100m of Recent clastic material. Uranium mineralisation is hosted by partially carbonaceous sands and clays in the palaeo-drainage fill, that may have acted as redox fronts. The Napperby deposit lies immediately below and to a lesser extent within a calcrete layer overlying the sands and clays as coatings, disseminations, pellets and blobs (‘nuggets’) of carnotite up to 5 cm long.

Detailed geophysical and geochemical programs will target the interpreted projections of this zone from the position of the radiometric anomalies and to the north, projected under Lake Lewis. Aircore/sonic drilling of key targets identified will follow.

The Carrara tenement is considered highly prospective for:

Near surface within EL32693 are the Georgina Basin sediments, that are interpreted to unconformably overlie the prospective Palaeo-Proterozoic units at depth. The area is poorly explored, particularly for minerals within the basement. There are several stratigraphic holes drilled in the area by GA in collaboration with the Northern Territory Geological Survey (NTGS) that, in combination with seismic data, reveal that the Tennant East Belt lies at only moderate depth below the clastic sediment filled basins. The Mt Isa Province units are interpreted to lie at greater depth to the south of the faulted contact with the Lawn Hill Platform.

Initial exploration on EL32693 will focus on acquiring detailed magnetic and gravity data in order to detect buried Warramunga Formation and target Tennant Creek style, high-grade, IOCG deposits that will then be tested by drilling, focused on discrete and coincident magnetic and gravity highs.

Initial exploration for Lawn Hill Platform/Mt Isa Province mineralisation would focus on modeling and interpretation of geophysical data sets to target coincident gravity/magnetic features that correlate with basement highs interpreted from seismic data in the area. Key stratigraphic holes, potentially in collaboration with the NTGS and/or GA, would then test these basement highs for mineralisation both within the overlying Georgina Basin and within the underlying Lawn Hill Platform/Mt Isa Province units. 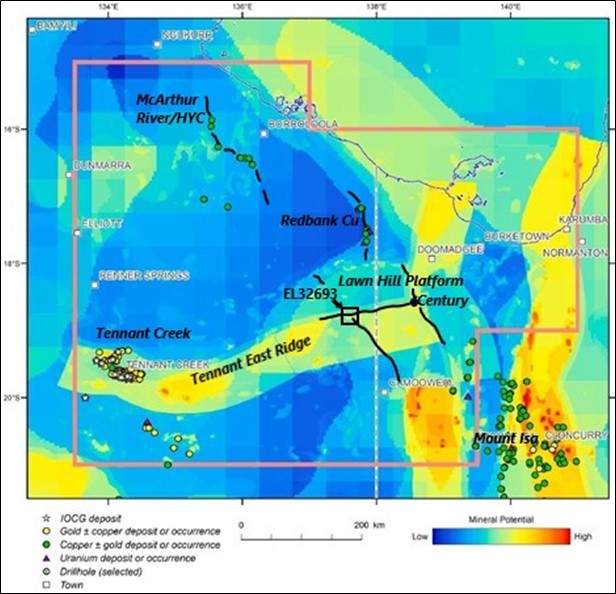 During the Quarter the Company completed the acquisition of the Ninghan Gold Project, E59/2402 (“the Project”), which is located approximately 50km southwest of Paynes Find in the southern part of the highly gold-endowed, Murchison Province of Western Australia.

Mt Gibson Gold Mine is located less than 20km along strike to the south of the Project, and has previous production of nearly 0.9Moz’s and a recently released resource upgrade by Capricorn Metals Ltd of 2.1Moz, for a total of 3.0Moz pre-mining gold endowment (see map below). 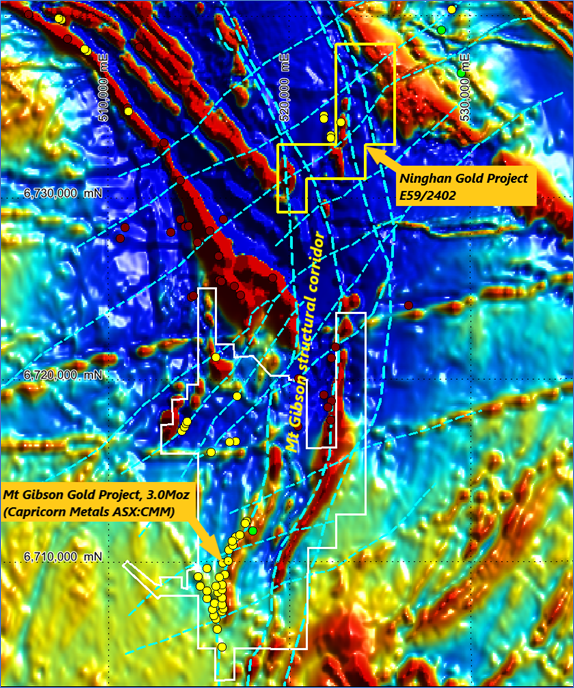 The Mt Gibson gold deposit is associated with a north-northeast trending structural corridor that continues from Mt Gibson, north, passing through the western side of E59/2402 in an area of shallow cover/no outcrop. A second, parallel, north-south trending structure passes through the eastern side of the tenement, also in an area of cover. The historical Wolfram Queen gold-tungsten mine occurs in the outcropping area in between these key structural corridors and is associated with north-northeast trending cross-faults that continue into targeted areas to the northeast and southwest.

Interpretation of regional aeromagnetics indicates that the two, gold-anomalous, structural corridors extend for 5km strike-length within the Ninghan Gold Project tenement. These structural corridors are interpreted to continue and link with the >3.0Moz Mt Gibson gold deposit less than 20km to the south. Previous RAB and limited aircore drilling has confirmed that the buried structures are highly gold anomalous with two key anomalous corridors identified, the Triple A and the Beanthinny zones (see map below). 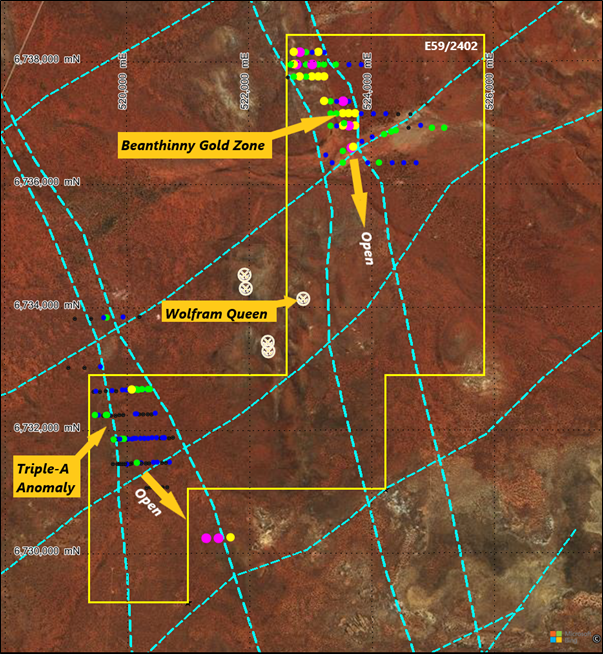 The Company is continuing to focus on acquiring other tenements in the region where interpreted mineralised structural trends have not been adequately tested under-cover.